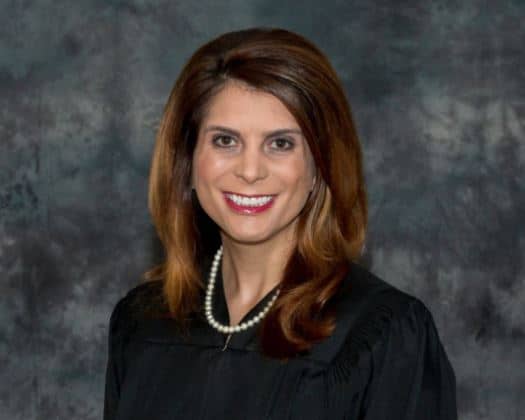 Forced by the Florida Supreme Court to tap a new justice, on Monday, Gov. Ron DeSantis announced he was naming Judge Jamie Grosshans to it.

“I’m pleased to announce that I’ve selected Judge Jamie Grosshans to serve as a justice on the Florida Supreme Court,” said DeSantis. “As an appeals court judge, a successful lawyer in private practice and a working mother of three, I am confident that Judge Grosshans’ breadth of experience in the legal profession and in life will make her a successful Supreme Court Justice, and I look forward to her assuming the bench on our state’s highest court.”

Grosshans is currently serving as a judge on the Florida Fifth District Court of Appeal, where she has been since 2018. Before that, she served a judge in the  Orange County Court and as an assistant state attorney for that county.

William Large, the president of the Florida Justice Reform Institute, praised the pick.

This is the second pick DeSantis has made for the vacant seat. On Friday, the Florida Supreme Court unanimously ordered DeSantis to pick a new Supreme Court justice, insisting that Judge Renatha Francis is ineligible to serve.

The state Constitution requires a Florida Supreme Court justice to be a member of the Florida Bar for at least ten years. DeSantis named Francis to the court in May but said she would not be sworn in until Sept. 24 when she reached ten years of membership with the Florida Bar. State Rep. Geri Thompson, D-Windermere, sued over the pick, insisting Francis was not eligible. The Supreme Court ordered the governor to name a new justice by Monday and DeSantis did so after Francis withdrew.

Back in May, DeSantis announced that he was naming Francis to the seat held by former Justice Robert Luck who was named to the U.S. Court of Appeals for the Eleventh Circuit by President Donald Trump. Currently a judge for the 15th Circuit Court, where she has been since 2019, Francis also served as a judge for the Miami-Dade County Court.