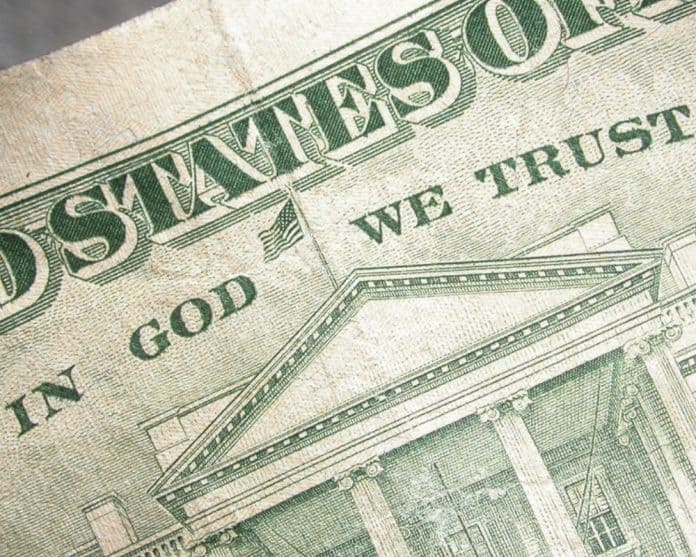 A poll taken for the College Fix finds that nearly half of America’s college students support removing the phrase “In God We Trust” from American currency.

Students were asked, “Do you  believe the motto ‘In God We Trust’ should remain on U.S. currency or should it be removed?” While more than half–53 percent–of those surveyed said the motto should stay, 45 percent of college students said it should be removed.

There was a major partisan divide on the issue with 94 percent of Republicans wanting to keep the motto while two-third of Democrats in college–67 percent–want to get rid of it. Independents leaned towards keeping the motto with 56 percent wanting it to stay while 44 percent want it removed.

The survey also found that the main reason some college students were against the phrase because they felt it violated the separation of church and state.

“In God We Trust” was initially put on coins during the Civil War in 1864. In 1955, Congress voted to put the phrase on all currency thanks to U.S. Rep. Charles Bennett, D-Fla., who represented the First Coast and Northeast Florida in Congress for four and a half decades. The phrase is also the official motto of the state of Florida.

The poll did not shock some religious leaders.

“While I’m not surprised, I’m saddened. A generation or two has lost touch with its heritage. For all the talk of equality in America, few realize that it is the theistic foundations that ground it. In our ‘progressive’ removal of God, we should beware of what follows,” Corey Miller, the president of the nationwide campus ministry Ratio Christi, told the College Fix.

The poll of 1,001 college students, drawn from College Pulse’s Undergraduate Student Panel that includes over 240,000 verified students representing more than 800 different colleges and universities in all 50 states, was taken from Aug. 22 through Aug. 24 and had a margin of error of +/- 3.5 percent.