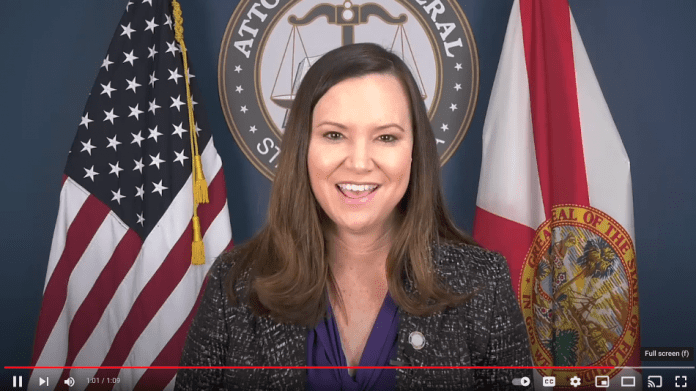 The holiday season is a time to celebrate with family and friends, and often includes Floridians traveling more. Unfortunately, these holiday celebrations can lead to DUI arrests—with the highest numbers of nationwide DUI arrests happening between Thanksgiving and the end of New Year’s weekend. In recognition of National Impaired Driving Prevention Month, this week, state Attorney General Moody encouraged everyone to stay vigilant on the road, drive defensively and report suspected impaired drivers by dialing **FHP (347).

“The holiday season is a time for family, friends and festivities—one of the most anticipated and celebrated times of the year. However, it is also when DUI arrests and crashes increase. So please be careful on the road during this time of the year and never drink and drive,” Moody said.

Already this year, the Florida Department of Highway Safety and Motor Vehicles Crash Dashboard is reporting more than 4,000 crashes due to driving under the influence of drugs and alcohol. This resulted in more than 500 fatalities because of impaired drivers. These numbers are expected to increase during the holiday season based off impaired driving crash statistics from the past two years. In December 2020 alone, 532 impaired driving crashes were recorded, while 537 crashes occurred in December 2019.

Moody recommended following these tips for safe travels on the roadways this holiday season:

Call a cab or ride-sharing service if there is no designated driver;

Fasten seatbelts when driving or riding in a vehicle;

Avoid distracted driving, including texting while driving; and

Beware of the increase of impaired drivers—especially at night.