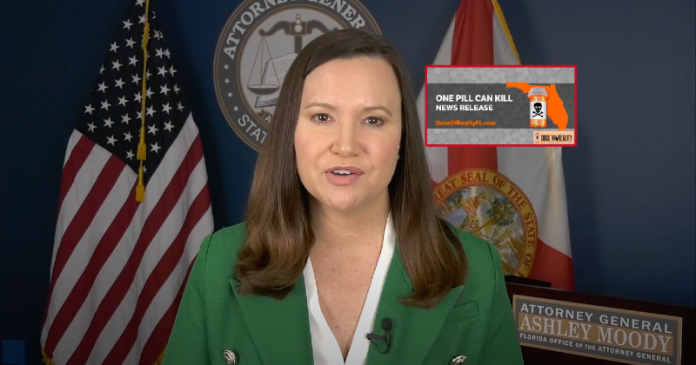 On Thursday, Florida Attorney General Ashley Moody warned about a sharp increase in the number of counterfeit pills that contain a deadly amount of fentanyl.

A recent investigation by the Drug Enforcement Administration (DEA) found that six out of ten fentanyl-laced fake prescription pills contained a potentially lethal dose of fentanyl—up 50 percent from a similar investigation last year. Moody warned Floridians to stay away from illicit drugs as the risk of fatal overdose continues to rise.

“We have been warning Floridians that just one pill can kill, but as fentanyl continues to flood across the U.S.-Mexico border in record amounts, the message is quickly evolving into ‘One Pill Will Kill.’ I cannot stress enough how vital it is to never use drugs—as lethal amounts of fentanyl are increasingly being discovered in so many illicit substances creating a terrible spike in overdose deaths,” Moody said.

The investigation by DEA in 2021 found four out of ten fentanyl-laced prescription pills seized contained a lethal dose of fentanyl. According to a release from DEA, more than 20.4 million fake prescription pills were seized in 2021—a 50-fold increase in just three years. Often, users have no idea that fentanyl is in other drugs until it is too late. The low cost of production encourages drug traffickers to lace other illicit drugs with the cheaper, deadlier fentanyl.

Moody added DEA’s warning to Florida’s new One Pill Can Kill webpage on the Dose of Reality Florida website. The webpage focuses on the dangers of illicit fentanyl in hopes of raising awareness and helping save lives.]

The Dose of Reality Florida website is a one-stop resource for Floridians to learn about the dangers of opioid misuse, how to receive support for addiction and where to drop off unused prescription drugs.

In June, Moody released the Fast Facts on Fentanyl Toolkit, an informational resource for parents to help protect children from digital drug dealers online. The toolkit highlights how drug dealers are utilizing social media to sell illicit substances. It also warns that substances may contain deadly amounts of synthetic opioids.