This week, even as the national debt reached the $22 trillion mark, U.S. Rep. Dan Webster, R-Fla., doubled down on his efforts to reduce federal spending, showcasing his efforts by returning part of his congressional salary.

Webster cut a check to the Bureau of the Fiscal Service at the U.S. Treasury Department, handing back some of his salary. While he was first elected to the U.S. House in 2010, Webster only accepts the salary a member of Congress would have earned in 2008.

“Each year since his election to Congress, Webster has rolled back his salary to the 2008 level. If all government spending was rolled back to the 2008 amounts, the federal budget would balance,” the congressman’s office noted.

Webster weighed in on why he continued to cut checks to the Fiscal Service Bureau.

“For too long Washington has operated under the mindset that if money is collected, it should be spent,” Webster said on Wednesday. “As an advocate of reducing spending, every year I return money from my salary back to the American taxpayers.

“I ran for office pledging to do my part to stop the spigot of spending and get our fiscal house in order,” Webster added. “Although this check may appear to be a small action given the trillions of dollars the federal government spends, it is a step in the right direction. I pledge to continue to work hard on behalf of Florida’s hardworking taxpayers and families to advance common-sense reforms and principled policy and budgets that get our fiscal house in order.”

A longtime leader in the Florida Legislature, including being the first Republican to serve as speaker of the state House since Reconstruction, Webster was elected to Congress in 2010 when he defeated U.S. Rep. Alan Grayson, D-Fla. Webster challenged Republican U.S. House Speakers John Boehner, R-Ohio, and Paul Ryan, R-Wisc., but came up short both times. 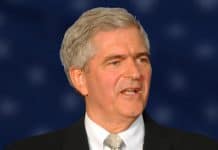