It’s an understatement to say the divisiveness of Critical Race Theory (CRT) continues.

Those who oppose it are racist, bigot, anti-truth, white supremacist, and more. Those who embrace this theory believe it’s necessary in order to teach history, truth, and facts. How does one determine what’s right?

Let’s consider a couple of basic premises, such as where this theory comes from and how it relates to the declining health of our education system.

Origins of CRT. Critical Race Theory is derived from critical theory, a social and political philosophy associated with the Frankfurt School. This school of thought comes from Marxist doctrine, where social structure is based on a social class system. The utopian socialist ideology claims that the bourgeoisie or capitalists must forfeit their surplus-value, think profits, to ensure the proletariat or worker is given what the government says they are entitled to. In America, we call this redistribution of wealth and resources.

Another point to ponder is that Marxism has been adopted and modified by dictators such as Lenin, Stalin, Mao, Castro, and others over the years. They claimed to want to build a more equitable society, but the truth is they became some of the most brutal tyrants in history. In addition, notice those promoting the theory weren’t charitable with the wealth they amassed.

Opportunity and Choice for America. From this, the term equity of outcomes thinking was derived, and it’s why the CRT translation of equity does not equate to equal opportunity. America is a capitalist economy. The Founding Fathers knew free-market ideas were essential to affording opportunity and success. They chose to break from Great Britain, which was under the rule of King George III, where there was a class system that included poverty. They knew the disparity between success and failure came from the freedom to choose. Therefore, our founders wisely sought a system of opportunity and choice.

This leads to the importance of understanding how choices facilitate decision-making. One may not think much about making decisions because we make them every day. We decide what to eat, where to shop, which gas station we prefer, or simply whether to attend a local community meeting or not.

On the other hand, decisions can have dire consequences when ample information and communication isn’t furnished. That’s why it’s critical to recognize the role education has in our society. Schools employ individuals who are expected to transfer knowledge to assist with creating good citizens. When insufficient or non-relevant information is provided, students are not well served, which often proves to be harmful. When only one or limited perspectives are introduced during the learning process this will result in unintended consequences.

One thing is clear – what students learn directly affects how families, jobs, finances, relationships, and lives unfold and whether the results will produce positive or negative outcomes.

Declining Academic IQ. Enter CRT along with like theories and ideologies that have been inserted into the K-12 environment. When the focus is placed on how a child feels about a particular thing or situation or no consequences are given based on poor behavior or performance, this develops an emotional vs. academic IQ. Over the past several decades, students have been forced to focus on subjects that are, in some ways, hostile to being a good citizen. What they have learned is how to manipulate the system to their advantage.

This reckless focus on race, gender, economic status, or some other social label only continues to divide and breed failure. The rise in poor behavior causes parents to be concerned with safety. The decrease in reading and math scores, as well as other subjects, cause parents to seek alternative educational environments. The unwillingness of school boards and administrators to listen to parents’ concerns and work with parents only exacerbates the divide. What students are learning matters. Unless these Marxist tenets are eradicated from K-12 curriculum and the classroom, test scores will continue to spiral downward. The test scores gap will not be reduced. There will be no increase in the academic IQ of our students.

What We Need is Common Sense. Some claim a belief in God is racist. Higher learning standards are racist. The name of a school or building can be racist. Historical statues represent racism. The way to combat anti-racism is to interject more racism. When will this lunacy stop?

It’s unbelievable that a theory can be so divisive, illogical, and void of common sense, yet many take it as gospel. Supporting a strictly black or white (pun intended) perspective on what we know instinctively to be right vs. wrong defies logic. Yes, there usually is some gray area, but those who show respect, apply thought, and believe in humanity will see that America is not an inherently or systemically racist nation. We are simply human beings trying to make the best of our situation with the skills and talents the Almighty Father has blessed us with.

One-size-fits-all begets group think, which begets outcomes that fail our students. We need viable, realistic solutions. Let us be wise and discerning rather than spew ignorant rhetoric that’s void of common sense.

Karen Hiltz, a speaker and author from Sebastian , is a Navy veteran, retired federal procurement professional and a former professor of business and public school board member. She has a BA and MBA in Management and an EdD in Leadership Studies. 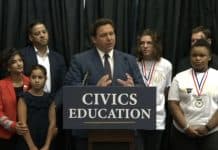