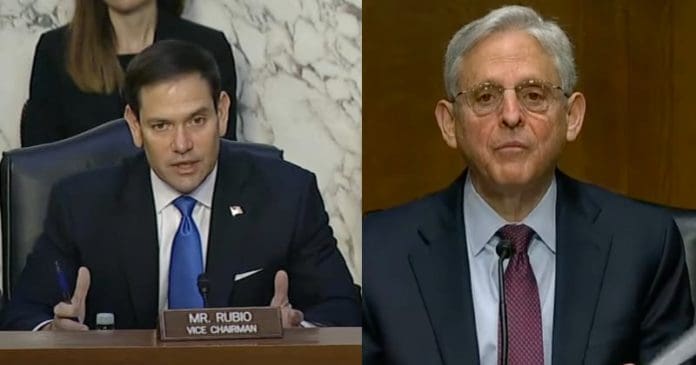 Rubio previously called on the U.S. Department of Justice (DOJ) to prosecute those intimidating Supreme Court justices. DOJ did not respond to Rubio until the arrest became public.

I write to follow up on my original letter dated May 11, 2022. In that letter, I asked the U.S. Department of Justice (DOJ) to publicly condemn and investigate the ongoing and unlawful efforts designed to intimidate Supreme Court Justices, including by “protestors” who made threats outside their homes following the leak of a draft opinion from the U.S. Supreme Court in Dobbs v. Jackson Women’s Health Organization. I conveniently received a response to my letter from the DOJ on the same day that an attempted assassination of Justice Kavanaugh was made on June 8, 2022.

According to the federal complaint, a man carrying a Glock 17, tactical knife, zip ties, and other burglary tools, was arrested while approaching Justice Brett Kavanaugh’s home. He told officers that he was angry and wanted to kill Justice Kavanaugh because the Court may overturn Roe v. Wade. Violent acts like this should come as no surprise, given that the threats made outside of Justices’ homes were precisely the cause for alarm that we referenced in asking the DOJ to hold these bad actors accountable. In the Senate, we responded to those threats by passing S. 4160, the Supreme Court Policy Parity Act, which would enhance federal protection for the Justices and their families. As you are no doubt aware, this bipartisan legislation has been stonewalled by House Democrats, who continue to block its passage. Even in light of these disturbing facts, on June 9, 2022, Speaker Pelosi went so far as asserting that “no one is in danger.” This kind of partisan politicking by House leadership has hamstrung critical judicial security measures and made the DOJ’s responsibility of enforcing federal law even greater. The DOJ can no longer afford to remain on the sidelines and must instead commit to investigating and prosecuting criminal actors who have answered the call to violence.

These criminals are not only targeting Supreme Court Justices. As you know, radical pro-abortion activists have targeted pro-life centers, groups, and churches across the United States with arson, vandalism, and threats of violence simply because of their pro-life views. Catholic bishops and priests across the nation have reported credible threats to churches and members of the clergy. For instance, the Archdiocese of Miami Respect Life was vandalized with the threatening message, “if abortion isn’t safe, neither are you.” Similarly, pro-life crisis pregnancy centers, which provide critical resources for pregnant mothers and babies have been attacked, including one in Buffalo, New York, that was fire bombed on June 7, 2022. The violence is just what a leaked U.S. Department of Homeland Security (DHS) memo correctly predicted: “Grievances related to restricting abortion access could fuel violence by pro-choice abortion-related violent extremists.”

The DOJ must protect the integrity of the Court and protect the rights and freedoms of pro-life organizations. I therefore request answers to the following questions:

1. Explain why the DOJ has failed to investigate acts of violence against pro-life groups, including crisis pregnancy centers?
1.Does the DOJ plan to classify these crimes as acts of domestic terrorism?

2. Does the DOJ believe that “no one is in danger,” as stated by Speaker Pelosi?

3. As confirmed at the time by then-White House Press Secretary Jen Psaki, is it still President Biden’s position to “encourage” protests “outside of judges’ homes”?

4. Does the DOJ support swift passage of the Supreme Court Policy Parity Act?

5. Is the DOJ coordinating with DHS and other U.S. Attorney’s offices across the nation to investigate and prosecute criminal acts against pro-life groups?