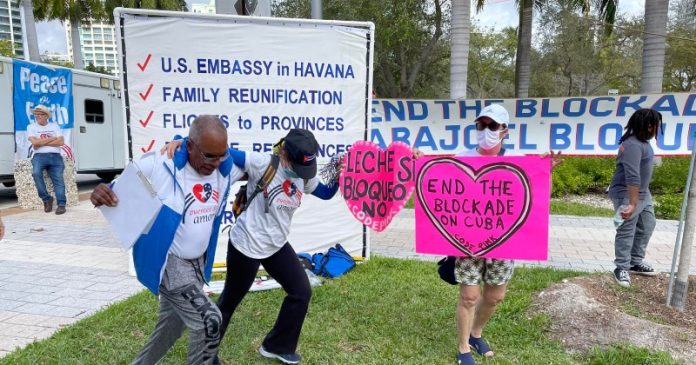 On July 31, 2022, a group with ties to the communist regime in Cuba engaged in political activity in Coral Gables, Florida.

U.S. Sen. Marco Rubio, R-Fla., sent a letter to Federal Bureau of Investigation (FBI) Director Christopher Wray urging him to immediately investigate the activities of Puentes de Amor and its members, who are acting as unregistered foreign agents of the Cuban dictatorship, in violation of the Foreign Agents Registration Act (FARA).

I write to request that the Federal Bureau of Investigation (FBI) immediately initiate an investigation into the activities of Puentes de Amor (“Bridges of Love”), a group operating in the United States and whose members are acting as unregistered foreign agents of the Cuban regime, in violation of the Foreign Agents Registration Act (FARA).

Under the FARA, certain agents of foreign principals must register with the United States if they engage in covered activities, including certain political demonstrations intended to influence the policy of the government. Yesterday, Puentes de Amor held a demonstration in Coral Gables, Florida, as part of a coordinated effort by the Cuban regime to sow division, incite conflict, and influence the foreign policy of the United States. The group also flew flags marking Castro’s July 26th movement, in open support of the Cuban Revolution that ultimately led to the communist dictatorship which remains in place today.

Puentes de Amor has well known associations with the Cuban regime, and as recent as last month, its leaders met with the Diaz-Canel regime in Cuba. The FBI should acknowledge the group and its members for what they are – malign foreign actors inside the United States – and conduct investigations of individuals who may be acting as foreign agents of the Cuban regime so that all FARA violations can be enforced to the fullest extent of the law. Consistent with the U.S. Department of Justice’s often-cited efforts, FARA increases transparency in our democratic system by disclosing individuals and entities engaged in foreign influence activities. As such, I respectfully request an immediate investigation into Puentes de Amor, its members, and activities.