At the end of last week, moveBuddha released its Florida state migration report includes the latest 2022 search data to see which cities are the most popular this year and also reviews past trends to give us a few more insights.

Key findings from the Florida Migration Report include:

Nearly 3 million flocked to Florida’s already populous state between 2010 and 2020.
Florida saw the sharpest rise in net migration flow rate from 2020 to 2021.

Californians and New Yorkers lead the surge into 2022: each state represented, respectively, 10 percent of inbound moves to Florida as of early 2022.

Over the past decade, the fastest-growing Florida metro areas have been Orlando and Tampa, both netting 21 percent growth from 2010 to 2020.

Florida’s year-over-year rate of inbound moves increased more than any other state from 2020 to 2021.

2022 moves into the Sunshine State are being fed primarily by those coming from New York and California, followed by Illinois, New Jersey, and Pennsylvania.

Ocala led the state when comparing queries for inbound moves vs. outbound moves, followed by Sarasota, St. Augustine, Tampa and Palm Coast, all of which are all seeing over twice as many moves in than out.

Fast-growth cities that have seen some of the most significant jumps in area home values are located on the Southwest coast: Cape Coral (+63 percent), North Port (+58 percent) and Bonita Springs (+54 percent).

The data was collected from Jan 1 to May 4 and included more than 16,000 queries in Florida alone. 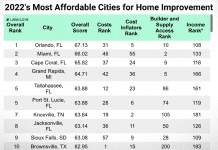