A new poll shows a majority of both Democrat and Republican voters have little appetite to cut certain federal programs.

A recent Hill-HarrisX survey of registered voters looks at what voters think on issues ranging from military spending to education and infrastructure. Voters from both sides of the aisle support increasing federal spending on healthcare, infrastructure, Social Security, Medicare, veterans benefits and education.

The pollsters noted their surprise with how Republicans–who campaign on smaller government– wanted to keep federal spending about the same for the State Department, energy, food and drug inspection, unemployment aid, agriculture, fighting crime, scientific research and natural disaster relief.

Even on other fronts, Republicans showed little taste for cutting spending with only 22 percent wanting to slash unemployment aid and only 21 percent supporting reducing funds for the State Department.

The pollsters said their latest survey was very similar to a poll conducted back in April by the Pew Research Center. Pew found there was very minimal support from members of both parties when it comes to cutting federal spending.

The Hill-HarrisX survey of 1,001 registered voters across the nation took place on June 7-8 and had a margin of error of +/- 3.1 percent. 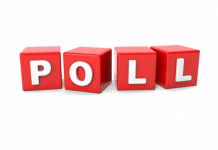 Most Americans Want Religion Out of Politics, Poll Shows