Scott introduced the proposal two weeks ago with U.S. Sen. Mike Braun, R-Ind., as a co-sponsor.
“In September, the Office of Inspector General (OIG) of the Department of Homeland Security (DHS) reported that DHS failed to properly vet and screen Afghan evacuees coming into the U.S. and may have allowed entry to persons who were national security and public safety threats,” Scott’s office noted.

The bill would “require the U.S. Customs and Border Protection (CBP) Commissioner to:immediately identify evacuees from Afghanistan who arrived in the U.S. between July 2021 and January 2022, and provide evidence of full screening and vetting based on confirmed identification of those evacuees; ensure recurring and periodic vetting processes established for all paroled evacuees are carried out for the duration of the evacuees’ parole period in the U.S.; provide to the Director of National Intelligence, the Secretary of Defense, the Secretary of State, the Secretary of Homeland Security, the Attorney General, and the law enforcement agencies of the state and locality in which each evacuee is residing evidence that the full screening, vetting and the recurring and periodic vetting processes have been carried out.” The bill would also “require the Secretary of Homeland Security and Office of Inspector General of the Department of Homeland Security to issue a report to Congress, no later than 180 days after the date of the enactment, on the findings and results of the screening, vetting and number of evacuees who were ineligible for admission to the U.S. and the specific reason the evacuee was found ineligible.”

Scott weighed in and why he introduced the bill this week.

“President Biden’s botched withdrawal from Afghanistan put thousands of Americans at risk and resulted in the inexcusable and unnecessary deaths of 13 American soldiers,” Scott said. “Nobody wanted to be in Afghanistan forever, but under Biden’s failed leadership, the United States was humiliated in our exit from the country, allowing a full and immediate takeover by the Taliban. We were ill-prepared to accept tens of thousands of evacuees. We can never allow this to happen again, and must now ensure that every Afghan evacuee who is still on American soil poses no risk to our communities and families. I am grateful to all the Afghans who worked with our military, supported our troops and opposed the Taliban, and I want to ensure their safety. But if we can’t defend our borders and properly vet every person coming onto American soil, then we don’t have a country. I hope my colleagues recognize the commonsense nature of my bill and ensure its quick passage.”

The bill was sent to the U.S. Senate Judiciary Committee. So far, there is no companion measure over in the U.S. House. 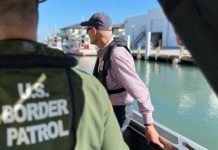