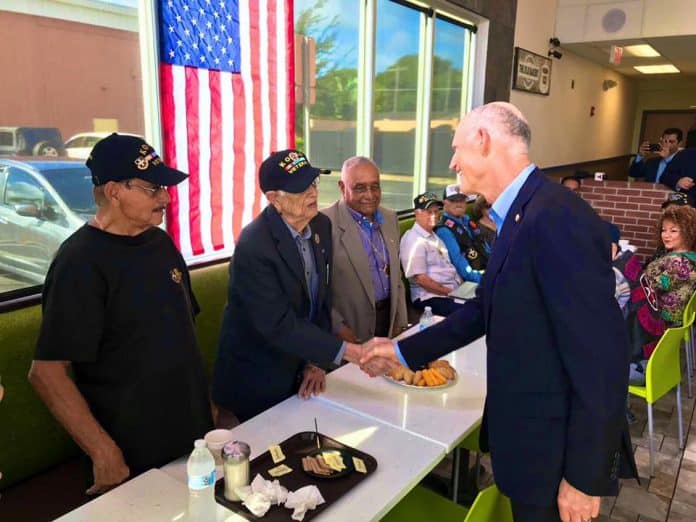 This week, U.S. Sen. Rick Scott, R-Fla., led Republicans in pushing a proposal “to ensure the federal government prioritizes funding for our military, veterans and seniors should the federal debt ceiling be reached with no action from Democrats to raise or suspend it.”

Scott brought back the“Full Faith and Credit Act” with U.S. Sen. Pat Toomey, R-Penn., as the main co-sponsor. More than ten other Republicans are backing the proposal including U.S. Sen. Marco Rubio, R-Fla.

Scott insisted it was time for Congress to “take action to address America’s nearly $30 trillion federal debt and get the reckless spending which fuels it under control” and called on Congress “ to refuse to increase the debt ceiling without also enacting true spending reform.”

This week, Scott returned to those themes as he pushed his proposal.

“Washington’s reckless spending is completely out of control,” Scott said. “The United States is nearing $30 trillion in debt and Democrats are pushing a radical, socialist tax-and-spending agenda that will push us to an unimaginable $45 trillion. Too many in Washington have accepted deficit spending, blank checks, tax hikes and skyrocketing inflation as the status quo. We need to be clear: there will be a day of reckoning for this and unfortunately American families will pay the price. It’s time for Congress to take significant action to put our nation back on a path of economic success. I did it in Florida and we can do it in Washington.

“Our bill, the Full Faith and Credit Act, would require the U.S. government to fulfill critical payments to the debt to avoid default and full fiscal calamity if Democrats refuse to take accountability for their wasteful spending and address the debt ceiling. It also ensures Americans depending on Social Security, Medicare, veteran benefits, as well as our service members, are not punished for Washington’s dysfunction. I want to thank my friend and colleague, Senator Pat Toomey, for previously introducing this bill and allowing me the opportunity to lead this effort with him at this critical moment. It’s time for Washington to start living within its means, just like every family and business across the nation does, and preserve the American dream—this bill is a great start,” Scott added.

“Democrats want Republicans to be complicit in their irresponsible, unprecedented, and out-of-control spending spree by pushing us to authorize the massive borrowing necessary to fund their $3.5 trillion wish list. If they insist on going down this partisan path, Democrats should take full responsibility and use the procedural tools available to them to raise the debt ceiling alone,” Toomey said. “Senator Rick Scott’s legislation would simply prevent Democrats from taking the full faith and credit of the U.S. hostage and ensure we make timely payments to our creditors, seniors, veterans, and the active duty military until they stop playing politics.”

“Democrats are attempting to fundamentally remake America through massive, debt-fueled spending. We cannot afford to gamble with the full faith and credit of the United States Government simply because Democrats want a blank check for their reckless agenda. Instead, we need to pass the Full Faith and Credit Act and begin to rein in our mounting debt crisis,” Rubio said.

The bill would ensure some aspects of the federal government–the public debt, Social Security, paying the military, services for veterans including pensions and Medicare–would “take priority over all other federally incurred obligations in the event that the federal debt reaches the debt ceiling.” The bill would also have the U.S. Treasury Department notify Congress “if the Secretary determines that incoming revenue will not be sufficient to finance the priorities described above over the following two weeks” and “raise the debt limit by the amount necessary to cover the difference between incoming revenue and the revenue needed to finance such priorities on a two-week basis.”

Americans for Prosperity, FreedomWorks and Club for Growth are backing the bill.

The bill was read twice and put on the Senate Legislative Calendar under General Orders.