The Florida Republican’s office explained the rationale behind the proposal and took aim at U.S. House Speaker Nancy Pelosi, D-Calif.

“Currently, members of Congress are eligible for their federal pension after just five years of service,” Scott’s office noted. “The amount of the pension depends on years of service and the average of the highest three years of salary. For example, career politician Nancy Pelosi has been in Congress for 33 years, and if she were to retire today, her annual taxpayer funded pension would be over $102,000. This legislation would end taxpayer-funded congressional pensions, aligning with President Trump’s agenda of draining the swamp in Washington.”

Scott weighed in on the proposal on Tuesday and continued his efforts to portray Washington as “dysfunctional.”

“I’m proud to introduce this bill ending taxpayer-funded congressional pensions. I’ve been in Washington a month and I can already see how dysfunctional it is. When Congress failed to do their job and created the longest government shutdown in history, hardworking Americans were forced to go without pay while members of Congress were still collecting paychecks. That is wrong and is exactly why I’m fighting to reform Washington,” Scott said before calling for term limits.

“It’s time for term limits and it’s time to make those in D.C. realize that the era of career politicians is over,” Scott added. “Americans should not have to foot the bill for generous salaries and pensions for members of Congress, and I’m proud to be working on common sense solutions to make Washington work for families across the nation.”

“It’s time we make Washington more like the private sector and the best place to start is to end taxpayer-funded pensions – like Nancy Pelosi’s six-figure annual pension – that senators and congressmen are entitled to in retirement. If we remove the luxurious perks from Congress, we’ll get better leaders: that’s why I’ll never accept my Senate pension and, if forced to, I pledge to donate every penny to Hoosier charities,” Braun said.

While the bill would stop end taxpayer-funded congressional pensions, it would allow members of Congress to keep using the Thrift Savings Plan (TSP) which, as Scott’s office noted, “is the government equivalent to a 401(k).” 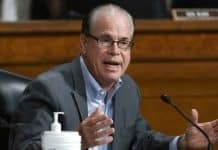