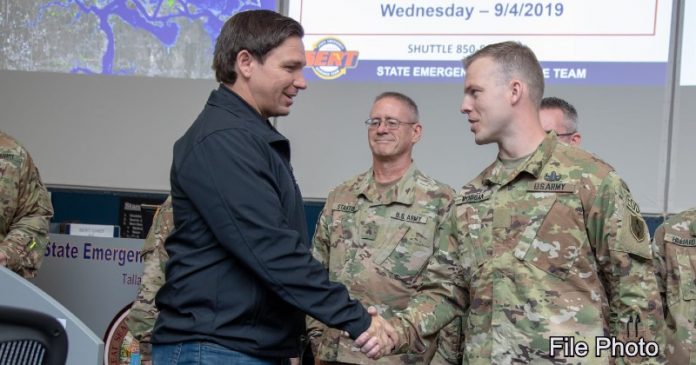 At the end of last week, Gov. Ron DeSantis signed an executive order activating the Florida National Guard, directing state law enforcement agencies and other state agencies to provide resources in support of local governments responding to the alarming influx of migrants landing in the Florida Keys, and providing additional support toward efforts to prevent further migrant landings on Florida’s shores.

DeSantis pointed at the blame at President Joe Biden and his administration.

“As the negative impacts of Biden’s lawless immigration policies continue unabated, the burden of the Biden administration’s failure falls on local law enforcement who lack the resources to deal with the crisis,” said DeSantis. “That is why I am activating the National Guard and directing state resources to help alleviate the strain on local resources. When Biden continues to ignore his legal responsibilities, we will step in to support our communities.”

“It is particularly burdensome for the Monroe County Sheriff’s Office, which has 194 deputies, to dedicate the necessary resources to manage the movement of hundreds of migrants while also ensuring adequate public safety. The Biden administration’s response has been inept, failing to provide the resources necessary to respond to the current mass migration event. Instead, the burden falls on local law enforcement, which puts Floridians at risk,” the governor’s office insisted.

The state of Florida will deploy air assets, including airplanes and helicopters from the Florida National Guard, and will bolster Florida Fish and Wildlife Conservation Commission marine patrol to support water interdictions and ensure the safety of migrants attempting to reach Florida through the Florida Straits.

On January 1, 2023, approximately 300 illegal aliens unlawfully entered Dry Tortugas National Park, located about 70 miles west of Key West, with an additional 45 illegal aliens entering Key West. This massive influx of illegal immigrants caused the park to close to ensure the safety of visitors and staff and to provide the space necessary to attend to the illegal immigrants. Since August 2022, federal, state and local law enforcement have encountered more than 8,000 migrants in waters off the coast of Florida.

“While this influx of migrants into South Florida certainly needs to be addressed, DeSantis is making the issue about President Biden in a blatant attempt to raise his own national profile,” Driskell said. “His press release mentioned President Biden’s name five times but never mentioned the hardliners in Congress who’ve spent years campaigning on our broken immigration system but never working towards a real solution. The Biden administration inherited this problem, they did not cause it.

“Congress must act – both to provide the resources to strengthen safety and enforcement, and to finally give us immigration reform. President Biden been asking for this since his first day in office,” she added. “Instead of taking more than a dozen failed attempts to elect a speaker of the House, congressional Republicans could get their act together and work towards changes to help secure our borders while keeping adequate paths for residency and citizenship. It is, quite literally, what is promised on that most recognizable American symbol, the Statue of Liberty: ‘Give me your tired, your poor, your huddled masses yearning to breathe free.’

“For a man who so obviously wants to migrate from Florida to the White House, Ron DeSantis certainly has little empathy for migrants trying to find a better life,” Driskell said in conclusion.