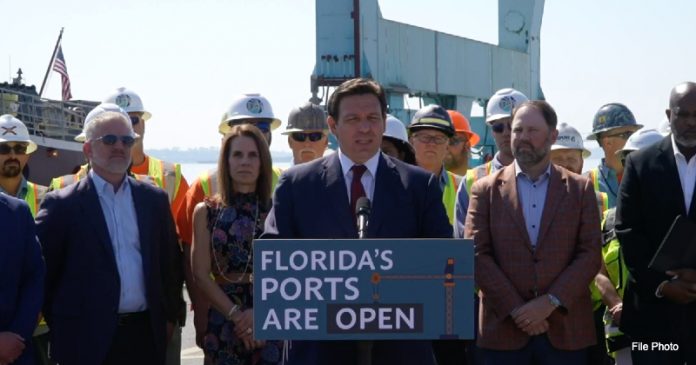 On Wednesday, the Florida Seaport Transportation and Economic Development Council (FSTED) released a report on the Sunshine State’s 15 seaports.

“Strong investments in Florida’s 15 seaports have well-positioned Florida to answer supply chain demands, and take advantage of a realignment in global trade routes, a new report shows,” noted the FSTED. “The report comes as 29 West Coast ports are working without a negotiated labor contract, and many shippers have already changed lanes to reroute to East Coast ports in fears that 2022 labor negotiations could lead to similar strikes, lockouts and slowdowns that occurred in 2002, 2008, 2012 and 2014.”

Gov. Ron DeSantis weighed in on the report on Wednesday.

“Florida’s continued investment in our seaports have made it a destination for companies from around the world frustrated with the logjams at Pacific coast ports,” said DeSantis. “We will continue to make the investments necessary to bolster our supply chain and improve our infrastructure to bring more business to Florida’s seaports.”

“Florida’s seaports are flexing their muscles, and seizing the opportunity to become a global hub by capturing an even larger share of international trade and related commercial activities,” said FSTED Program Administrator Michael Rubin.

The report also shows room for growth, including expanding services with Asian nations. Over the next five years, $4.5 billion in improvements are expected in ports across Florida, with the vast majority of it–75.1 percent–for those on the Atlantic coast.

The FSTED included the following highlights from the report:

Containerized cargo accounted for the second-highest percentage of total tonnage, up 16.2 percent.

Port Miami recorded its busiest cargo year in history, up almost 18 percent over last year, with most of the additional cargo attributed to imports coming from Asia which would normally go into California.

Port Tampa Bay container tonnage increased by 14 percent in the first quarter of 2022, with huge jumps in building material. Steel is up 122 percent; lumber is up 160 percent.

Port Everglades saw 11 percent growth year-over-year, and they are up more than 25 percent year-to-date.

At SeaPort Manatee, the first quarter of 2022 showed a 15 percent increase in short tons. Wood products, which normally go into California, have been coming to SeaPort Manatee.

Port Panama City handled an increased volume of forest product exports destined for the Far East, along with metals imports that previously moved in containers through another East Coast Port.

Cruising began its ascent from COVID-19 in June 2021, and approximately 24.8 million people are expected to cruise in 2022 based on current rates of vessel deployment and passenger capacity percentages.