Mason Dixon released a poll on Thursday morning which finds 62 percent of voters in the Sunshine State approve of DeSantis while around a quarter–24 percent–disapprove of him while 12 percent are not sure.

The poll of 625 registered voters in Florida was taken from March 18 through March 20 and had a margin of error of +/- 4 percent. 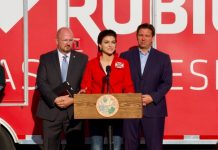