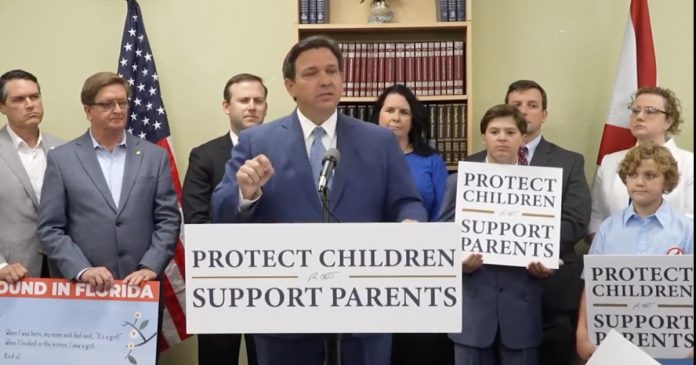 On Monday, Gov. Ron DeSantis signed a proposal that “reinforces parents’ fundamental rights to make decisions regarding the upbringing of their children” and “prohibits classroom instruction on sexual orientation or gender identity in kindergarten through third grade and prohibits instruction that is not age-appropriate for students and requires school districts to adopt procedures for notifying parents if there is a change in services from the school regarding a child’s mental, emotional or physical health or well-being.” While DeSantis and his allies have championed the proposal as defending parental rights, critics have labeled the legislation as the “don’t say gay bill.”

DeSantis weighed in on why he signed the law.

“Parents’ rights have been increasingly under assault around the nation, but in Florida we stand up for the rights of parents and the fundamental role they play in the education of their children,” said DeSantis. “Parents have every right to be informed about services offered to their child at school, and should be protected from schools using classroom instruction to sexualize their kids as young as five years old.”

“‘Parental Rights in Education’ empowers Florida’s parents and safeguards our children,” said Lt. Gov. Jeanette Nuñez. “This bill refuses to allow school boards and teachers unions the ability to hide information about students from their parents. In addition, it prohibits classroom discussion in grades K-3 on gender orientation and sexual identity. Throughout this legislative session, this bill has been maliciously maligned by those who prefer slogans and sound bites over substance and common sense. Fortunately, Governor DeSantis and I believe that parents should have a say. We will not back down to woke corporations and their same tired tactics that are steeped in hypocrisy. As a mother of three, I am committed to protecting the rights of parents.”

“Parents play the #1 role in a child’s life and I am thankful for the Governor, Legislature and so many parents who continue to stand up for parents’ rights to be the foremost authority involving their children,” said state Commissioner of Education Richard Corcoran. “Greater parental involvement leads to a better quality of life for children and this important legislation helps ensure Florida’s great educators collaborate with parents to ensure students are learning and flourishing, and I am thankful for Governor DeSantis’ commitment to all of Florida’s 2.9 million public school students.”

“Parents have a fundamental right to make decisions regarding the upbringing of their children, and schools should not be keeping important information from parents. Children belong to families, not the state,” said state Senate President Wilton Simpson, R-Tribly. “Parents are not the enemy, they are a child’s first and best advocate. This legislation strengthens the Parents’ Bill of Rights Act, safeguarding the rights and responsibilities of parents to decide how best to raise their children.”

“The government should never take the place of a parent,” said state Speaker Chris Sprowls, R-Palm Harbor. “We’re taking a firm stand in Florida for parents when we say instruction on gender identity and sexual orientation does not belong in the classroom where 5- and 6-year-old children are learning. It should be up to the parent to decide if and when to introduce these sensitive topics. This shouldn’t be controversial, and a majority of Americans agree. Only fanatics think the classroom curriculum from kindergarten through 3rd grade should include teaching little children about gender identity.”

Democrats in the Legislature stressed their opposition to the new law with state Senate Minority Leader Lauren Book, D-Plantation, painting it as a “divisive and particularly cruel legislation” on Monday.

“Dismissive and uninformed Republicans claims the reason for national outrage is because we haven’t read the bill. We read it. So did medical professionals, educators, community leaders, and parents. It is an attack on Florida’s LGBTQ+ community and our teachers. Perhaps the Senate Republican bill sponsor didn’t read it, or understand it, because he couldn’t even define simple terms in the bill, including ‘sexual orientation,’” Book said.

“Crafted in ignorance and fear-mongering, this legislation has little to do with student safety and everything to do with culture wars fabricated by Republicans,” she added. “What Floridians need is affordable housing, a living wage, and safe communities. This does nothing to address the issues hurting Florida’s families. Not only will teachers be punished, and school boards mired in needless litigation for allowing classroom discussion about a student’s own family structure, but children with LGBTQ+ family members will be both shunned and shamed by the very institutions that protect them. It is a disgrace that supporters of the bill blatantly ignore the will of the people while cultivating a police state void of any trust in our teachers.”

“This new law doesn’t help a single Floridian pay their rent, put food on the table, or afford health care. It does not create a single new job, protect our waters, or solve our growing insurance crisis,” Jenne said. “This is nothing but a political distraction designed to raise one man’s profile as he runs for higher office. Unfortunately, this governor is more interested in appealing to Republican presidential primary voters in Utah and Mississippi than he is in showing compassion and leadership to the people of Florida. This bill wasn’t necessary, and claims to solve a problem that frankly doesn’t exist. The words of the bill sponsors and the governor’s own staff clearly laid out the real purpose: they don’t like the LGBTQ community, and don’t mind sacrificing their safety to advance their agenda.”

“By signing #DontSayGay into law, DeSantis is attempting to censor and exclude an entire community of people from our public schools for his own political gain. This law doesn’t solve any problem that exists. Instead, HB 1557 has been weaponized by the governor’s office to launch a bigoted smear campaign to attack and defame LGBTQ Floridians with baseless accusations of grooming and pedophilia,” Smith said. “HB 1557 does absolutely nothing to prohibit conversations about sex, sexual activity or sex ed with young children, despite its proponents’ claims. The bill’s intentionally vague language leaves teachers afraid to talk to their students and opens up school districts to costly and frivolous litigation from those seeking to exclude LGBTQ people from any grade level. Even worse, #DontSayGay sends a hateful message to our most vulenrable youth who simply need our support.

“The battle against #DontSayGay is far from over,” Smith added. “To those LGBTQ youth in Florida and around the world struggling to find support, just know that you are loved exactly the way you are and we’ll continue to fight for you every single day because your lives are worth fighting for.” Ron DeSantis: ‘We Have Made Florida the Freest State’