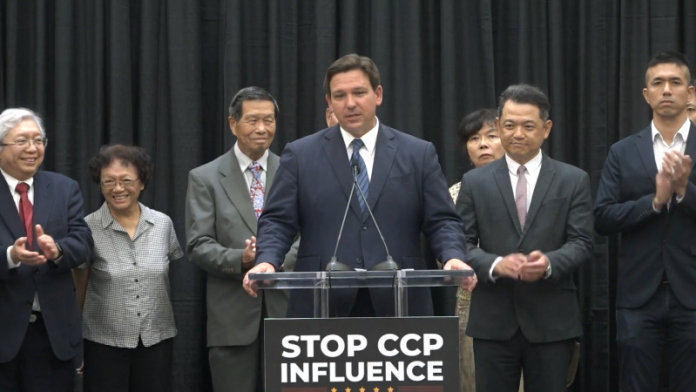 Last week, at an event in Miami, Gov. Ron DeSantis announced executive action and legislative proposals to address threats posed by the Communist Party of China and other hostile foreign powers in cyberspace, real estate, and academia.

These measures will curtail the intentions of all seven countries on Florida’s list of countries of concern, making it more difficult for China, Cuba, Russia, Iran, North Korea, Syria, or Venezuela to engage in espionage or influence operations within Florida’s borders and preventing purchases of agricultural land and lands surrounding military bases by those governments or their agents.

“From server farms to farmland, the Communist Party of China has been worming its way into our nation’s data storage systems and buying up tracts of land near sensitive national security sites,” said DeSantis. “By prohibiting the purchase of lands, state contracts with Chinese technology firms, and the infiltration of CCP-affiliated groups such as Confucius Institutes, Florida is leading the way to protect our nation from international foes.”

“The Chinese Communist Party cheats on trade, steals our intellectual property, and produces deadly drugs like fentanyl that are pouring into our southern border,” said Lt. Gov. Jeanette Nuñez. “Governor DeSantis’ announcements today are not only critical to protecting American interests and Florida farmlands but also to maintaining our national security. Florida will never kowtow to the oppressive regime of China.”

“With today’s Executive Order, Governor DeSantis takes decisive action to defend the State of Florida and all Floridians from the cyber threats posed by foreign countries of concern and associated groups,” said Department of Management Services Sec. Pedro Allende. “The Governor’s direction to develop cybersecurity and procurement rules and standards will make it harder for bad actors to gain a foothold on state infrastructure, will protect Floridians’ personal information and intellectual property, and will further secure key information systems and the critical infrastructure that our state and its citizens rely on each day.”

“Thanks to Governor DeSantis, Florida will not allow foreign adversaries and Communist dictatorships to have insights into some of the most sensitive data and cutting-edge research taking place in U.S. academia,” said Commissioner of Education Manny Diaz, Jr. “As a Cuban-American, I know how Communist countries attempt to infiltrate schools and universities to steal intellectual property and indoctrinate young people with their dangerous and radical ideology. By removing this influence and focusing on the importance of American ideals and citizenship through civics education, Florida is again leading the way for the nation to follow.”

The governor’s office offered the following points of information:

Effective immediately, Governor DeSantis has signed Executive Order 22-216 to prohibit government entities from procuring technology products and services from companies owned by, controlled by, or domiciled in foreign countries of concern. The executive order directs the Department of Management Services (DMS) to promulgate rules and take any additional action necessary to ensure commodities and services used by state and local governments are not susceptible to exploitation by foreign countries of concern. This prohibits government entities from procuring or utilizing technology services that:

Have been determined by DMS to pose a risk to the safety and security of Florida due to the company’s connections to or use by a foreign country of concern;

A federal agency has prohibited due to a national security concern; and

Are designed, developed, manufactured, or supplied by companies or affiliated companies determined by federal or state government agencies to be owned, controlled, or domiciled in a foreign country of concern.

This will help prevent the exposure of government information and technology services and systems in Florida to other state and non-state actors affiliated with a foreign country of concern.

Governor DeSantis also proposed legislative action to prohibit government entities from contracting with companies owned by, controlled by, or domiciled in foreign countries of concern if the contract would provide access to Floridians’ personal information. This prohibition would include the bidding, submitting a proposal for, or entering into or renewing a contract with a government entity if the contract would provide the company with access to an individual’s name in combination with a Social Security number, driver’s license, financial account numbers, medical history, insurance policy numbers, etc.

Governor DeSantis has proposed legislative action to prohibit purchases of agricultural land and land surrounding military bases by foreign countries of concern. There have already been instances of Chinese Communist Party-affiliated companies purchasing land near military bases in other states, including Grand Forks Air Force Base in North Dakota. Florida is home to 21 military bases from every branch of the armed forces, and while the state has allocated money to purchase land nearest to some of these bases to increase security perimeters, more needs to be done to protect our domestic national security assets.

Last year, Governor DeSantis signed HB 7017 to require the disclosure of foreign donations to state educational institutions in excess of $50,000. This “naming and shaming” approach was intended to expose the influence of groups such as CCP-funded Confucius Institutes, with further punitive measures for non-disclosure. But even sub-$50,000 donations from individuals and groups pushing the agendas of hostile foreign powers on college campuses can undercut academic integrity, warp the perspectives of many students, and sway the research and writing of many professors to align with the interests and values of the sources of that funding.

That is why Governor DeSantis has proposed legislative action to amend Florida statutes relating to reporting requirements of foreign gifts to prohibit any gift to a higher education institution in Florida from any individual residing in or entity domiciled in a foreign country of concern or from any governmental entity within a foreign country of concern. A general bill on this topic could also impose additional restrictions, screening requirements, or pre-conditions on researchers from foreign countries of concern.