Perdue and Spano spoke at the event in Plant City which included a tour of the Strawberry Festival grounds.

“I want to thank Secretary Perdue for traveling to Plant City to speak to local growers. The Trump administration is clearly standing behind growers and farmers across America,” said Spano. “Today’s session was very productive in making sure we are putting America first and continue the fight against illegal market dumping that hurts our agricultural trade and small businesses.”

The event focused on the Trump administration’s efforts to protect American farmers including the impact of the USMCA trade agreement. The event also showcased an event that will be held in Plant City next month from the U.S. Agriculture and Commerce Departments and the Office of the United States Trade Representative which will focus on agricultural trade issues. 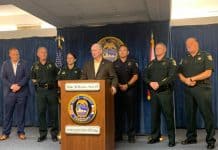