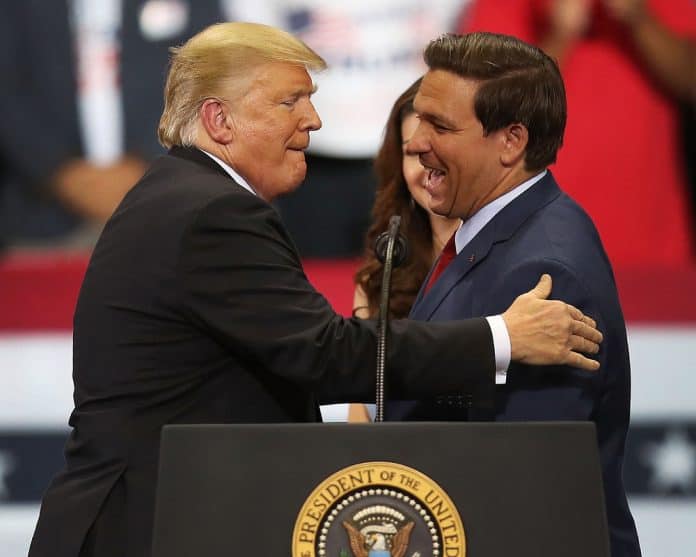 The midterm elections are only about two months away, but for many, it’s easy to look past them and start thinking about the 2024 presidential election. On the Republican side, the two most talked-about candidates are former president Donald Trump and Florida governor Ron DeSantis. Many Republicans would like a ticket with Trump as the presidential nominee and DeSantis as the vice presidential nominee, to avoid a divisive primary that could cost them the presidency.

Some caution, however, that the 12th Amendment might prevent such a ticket, since it seems to suggest that two candidates from the same state cannot run on the presidential ticket. The language of the amendment reads: “[t]he Electors shall meet in their respective states and vote by ballot for President and Vice-President, one of whom, at least, shall not be an inhabitant of the same state with themselves.”

Right now Trump and DeSantis are both residents of Florida. But this issue has emerged before. In 2000, right before Governor George W. Bush of Texas chose businessman and former congressman Dick Cheney as his running mate, ABC News published an article arguing that a Bush/Cheney ticket would face legal hurdles because Cheney maintained residency in Texas during his business career.

Cheney moved to Wyoming four days before Bush selected him as his running mate, and Bush/Cheney went on to victory. Liberals attempted a legal challenge on the residency issue, but courts and the legal community soundly rejected it. Cheney’s move to Wyoming put an end to the issue. The courts reasoned that Cheney had fulfilled the residency requirements by doing so.

The Bush/Cheney ticket is arguably a reverse version of a Trump/DeSantis ticket: Bush and DeSantis were both sitting governors, and thus ineligible to move. Cheney and Trump are businessmen with deep ties to other states. Some would say that Cheney had a major advantage that Trump does not. Cheney’s previous state of residence, Wyoming, loved him. Trump’s previous state, New York, is vigorously pursuing legal charges against him.

But there is no reason Trump would need to move to New York. He could move to Tennessee, Nebraska, Wyoming, or any other state that would react favorably to his residency. It does not matter that Trump has no previous affiliation with those states.

It’s worth noting that U.S. case law has opposed extraneous residency requirements for people running for Congress. This flexibility has allowed people like Alan Keyes and Hillary Clinton to move to new states to run for office. True, this case law has concerned states creating extra laws, as opposed to interpreting the 12th Amendment; but given that the judiciary has used the Constitution to strike down these laws, it is unlikely that the same judiciary would hold for extensive residency requirements to prevent someone from getting elected president or vice president.

There are many political reasons why a Trump/DeSantis ticket might not happen or might be a bad idea. But a legal argument against the ticket based on state residency is weak. With legal precedent this clear, the courts would have no choice but to hold for Trump/DeSantis.

Todd Carney is a lawyer and frequent contributor to RealClearPolitics. He earned his juris doctorate from Harvard Law School. The views in this piece are his alone and do not reflect the views of his employer. This article was originally published by RealClearFlorida and made available via RealClearWire.