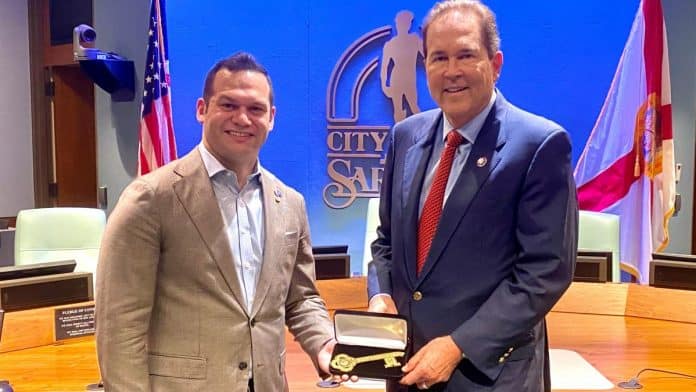 U.S. Rep. Vern Buchanan, R-Fla., announced this week that he has received the Key to the City of Sarasota by Mayor Erik Arroyo and the Sarasota City Commission.

“I am humbled and honored to receive the Key to the City of Sarasota,” said Buchanan on Monday. “Sarasota is a special place to live and raise a family. My sons went to school in Sarasota and my business is here. Since 2007, I have had the distinct pleasure of representing the City of Sarasota in Congress and I am pleased by the amount we’ve accomplished.”

The proclamation issued by the Sarasota City Commission reads as follows:

WHEREAS, since entering Congress in 2007, Congressman Vern Buchanan has had 26 of his legislative initiatives signed into law; These accomplishments include reforms to military training procedures, confronting the drug epidemic, funding research to mitigate red tide, helping workers save for retirement, strengthening Medicare, cracking down on scam artists who target seniors, improving the U.S. foster care system and measures to stop animal cruelty and helping Florida’s citrus industry; and

WHEREAS, Congressman Buchanan is a dedicated philanthropist. He has committed himself to diverse community causes, including the Boys and Girls Club, the Community Foundation of Sarasota County, the Walk to Cure Juvenile Diabetes, the American Heart Walk, the Mote Marine Laboratory and the Ringling Museum of Art.

NOW, THEREFORE, I Erik J. Arroyo, Mayor of the City of Sarasota, on behalf of the Sarasota City Commission and our residents, in recognition and appreciation for your efforts and achievements, do hereby confer the Keys to the City of Sarasota upon Congressman Vern Buchanan with all the rights and privileges pertaining thereto.