Simpson tapped state Sen. Aaron Bean, R-Fernandina Beach, to serve as president pro tempore for the next two years. State Sen. Kathleen Passidomo, R-Naples, who is next in line to be Senate president after the 2022 elections, will take over the Rules Committee. This new assignment should let Passidomo work with her expected partner in legislative leadership. Earlier this week, state Rep. Paul Renner, R-Palm Coast, who is expected to become House speaker after the 2022 elections, was named House Rules Committee chairman.

On Friday, Simpson sent a memo out to fellow senators informing them about his new team.

“I ask you to join me in voting for Senator Aaron Bean to serve as our Senate president pro tempore. As you know, Senator Aaron Bean has a contagious energy, boundless compassion for our state’s most vulnerable, and an abiding respect for each person he meets. First and foremost a family man, devoted to his wife Abby and their boys Bradley, Gray and Walker, Senator Bean brings a diverse range of personal and professional experiences to the Senate that allow him to relate to people from all walks of life and to build consensus without compromising principle. There is no question the impacts of the ongoing pandemic will change the look and feel of these next two years in ways none of us could have imagined when we first decided to run for office. Senator Bean’s authenticity, positivity and optimism, combined with his deep knowledge and experience in the legislative process, make him a perfect fit for the critical role of president pro tempore,” Simpson wrote.

First elected to the Senate in 2012 and representing all of his home base of Nassau County and part of Duval County, Bean is a Tallahassee veteran. After serving as a city commissioner and mayor of Fernandina Beach in the late 1990s, Bean was elected to the Florida House in 2000 and served until he faced term limits in 2008.

Passidomo is also an experienced legislator, something Simpson noted on Friday.

“Senator Passidomo has agreed to serve as our Rules chair,” he wrote. “With over four decades of experience practicing law and ten years of service in the state Legislature, she is well-qualified to assume this critical leadership position. Throughout her years of public service, Senator Passidomo has gained the respect of senators on both sides of the political aisle by listening to the concerns each senator brings forward and working to build consensus. She has exhibited sound judgment and a fair-minded, reasonable and thoughtful approach to decision making that, I am confident, will be a great benefit to the Senate over the next two years. Another important quality that often goes unseen is her dedication to maintaining a personal connection with her constituents, which I believe serves the Senate well.”

Passidomo was elected to the Florida House in 2010 and moved to the Senate in 2016. She served as majority leader from 2018 through this year. Passidomo represents all of Collier and  Hendry Counties and part of Lee County. She beat out Sen. Travis Hutson, R-Palm Coast, to be the next Senate president after Simpson. 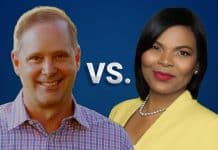