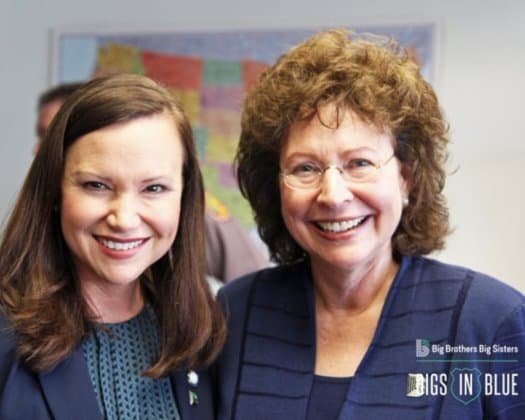 Moody, FDLE Commissioner Rick Swearingen and FLHSMV Executive Director Terry Rhodes sent out memos to staffers urging them to spend an hour a week mentoring at-risk children and teens in the Bigs in Blue program.

“The Bigs in Blue program is doing an incredible job building bonds between law enforcement and youth by showing children that an officer’s job is to protect them and their families,” Moody said on Tuesday. “I saw firsthand the impact that this program has on the communities it serves when I presented a Back the Blue Award to Big Brothers Big Sisters of Tampa Bay. Since then, I’ve been inspired to find a way to encourage more participation in this great program. I can’t wait to see the impact this program will have once we have even more law enforcement officers across the state participating. It is vital to our state that we do everything in our power to build trust and respect between law enforcement and the communities they serve.”

“FDLE members often volunteer in our communities, and Attorney General Moody’s efforts to bolster this program will provide additional opportunities for our members to serve others while building relationships between at-risk children and law enforcement,”  Swearingen said.

“Mentorship programs provide ongoing impactful relationships between law enforcement and the communities that we serve as well as the guidance needed for the future leaders of law enforcement in our state. It is an honor to collaborate with Attorney General Ashley Moody and our law enforcement partners on the ‘Bigs in Blue’ initiative,” Spaulding said.

Iorio has been off the Florida political stage since her second term as mayor of Tampa ended in 2011 but she is now the president and CE0 of Big Brothers Big Sisters of America.

“Attorney General Moody’s Bigs in Blue statewide initiative will enable more members of our law enforcement community to mentor young people, to bridge a divide that often exists between law enforcement and the communities they serve. Big Brothers Big Sisters is proud to partner with the Attorney General, FDLE and FLHSMV,” Iorio said on Tuesday.

“A state employee can take one hour a week, and up to five hours per month, as administrative leave for mentoring, tutoring, guest speaking, or participating in an established mentoring program, such as Big Brothers Big Sisters, Guardian Ad Litem, Senior Corps and Adult Literacy,” Moody’s office noted. “Big Brothers Big Sisters founded the Bigs in Blue mentoring program that focuses on pairing law enforcement personnel as one-on-one mentors to children in the communities they serve. The program has paired more than 3,000 children with mentors since its creation in 2017. The agency’s mission is: to provide children facing adversity with professionally supported, one-to-one mentoring relationships that will change their lives for the better, forever.”