On Wednesday, U.S. Rep. Greg Steube, R-Fla., led a letter “in demanding transparency from the U.S. Naval Academy on the denial of diplomas to unvaccinated Midshipmen.”

The congressmen wanted “answers regarding the U.S. Naval Academy denying Midshipmen from graduating and asked for an explanation on their authority or ability to influence the approval of Midshipmen religious exemption requests relating to the COVID-19 vaccine mandate.”

Steube weighed in on why he led the letter.

“Denying diplomas to otherwise qualified Midshipmen based solely on COVID-19 vaccination status would not only be a waste of our country’s four-year investment in Midshipmen who are eager to serve our nation, but could disrupt military readiness in a year that every branch had trouble recruiting. The U.S. Naval Academy must provide full transparency of their process to deny diplomas due to the absurd COVID-19 vaccination mandate, including details of cases where Midshipmen’s religious exemption requests were also denied,” said Steube. 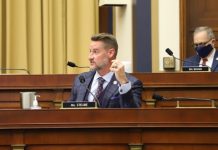