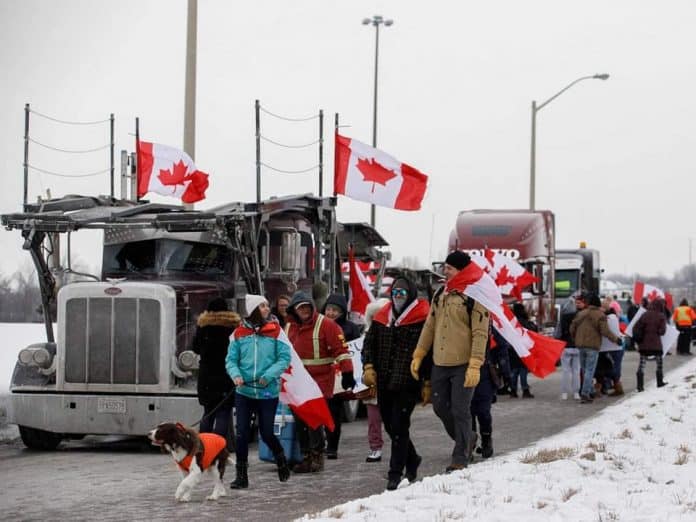 In the proclamation, Patronis highlighted the sacrifices of truckers that make up the backbone of the world’s supply chain and deliver critical food and supplies, especially during the start of the pandemic.

“From first responders to health care heroes and now even truckers, these frontline heroes have been hard at work since day one of the pandemic and now they’re under attack by the mandate mafia, at home and abroad. For more than two years, they risked their own health to deliver life-saving supplies and resources and Florida stands with American and Canadian truckers fighting back against heavy-handed mandates that will further stifle our supply chains and force truck drivers out of a job over the jab. In the Sunshine State under Governor DeSantis’ leadership, we value individual freedom and rights. If Canada can’t figure that out then we will embrace these truckers with open arms in Florida,” Patronis said on Monday.

The proclamation can be viewed below.

WHEREAS, hard-working freedom loving Canadian truckers banned together in protest to demonstrate their opposition to the Canadian Prime Minister’s vaccine mandate and the violation of their personal freedoms; and

WHEREAS, the Canadian truckers peaceful protest, dubbed the “Freedom Convoy”, has brought together over 8,000 supporters in the past week as an incredible act of civil disobedience; and

WHEREAS, truckers are the backbone of the north American economy and transport critical supplies for society to flourish, including food and medicine; and

WHEREAS, many states and countries alike have shown their support for the Canadian Truckers rights and have organized similar demonstrations to encourage upholding freedom; and

WHEREAS, the Canadian truckers’ demands are simply tied to personal freedom from government overreach and the liberty to choose to be vaccinated without the threat of a mandate or the implementation of contract tracing programs; and

WHEREAS, the state of Florida, under the direction of Governor DeSantis, respects the citizens of Florida’s right to personal freedom and remains a free state void of any vaccine mandates or requirements for contract tracing.

NOW, THEREFORE, BE IT RESOLVED that the Chief Financial Officer and State Fire Marshal of the State of Florida does commend and support the

and stands by their right to demand personal freedom and opposition to repression by the Trudeau government.
IN TESTIMONY WHEREOF the Chief Financial Officer of the State of Florida has hereunto subscribed his name and has caused the Official Seal of the State of Florida to be hereunto affixed in the City of Tallahassee on the 14th day of February 2022.