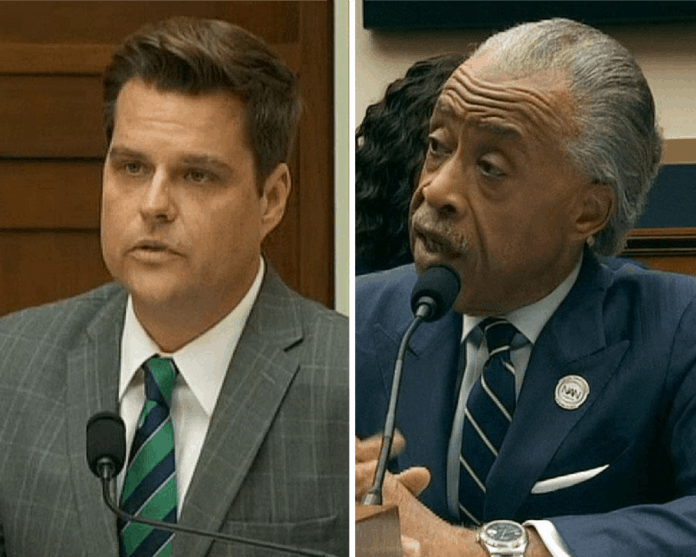 At a U.S. House Judiciary Committee hearing, Gaetz dug into Sharpton’s past comments and even showcased a resolution from former U.S. Rep. Joe Scarborough. Both Sharpton and Scarborough currently host shows on MSNBC.

Gaetz entered Scarborough’s resolution “Condemning the Racist and Anti-Semitic Views of Reverend Al Sharpton” which “recounted instances where Reverend Sharpton uttered repeated animosities toward the Jewish people, toward people of white descent, and toward people of color” in the congressional record.

At the funeral of Gavin Cato, as tensions rose in Crown Heights, Brooklyn, back in 1991, Sharpton called Jews “diamond merchants” and tried to tie them to apartheid in South Africa. In the subsequent Crown Heights riots, a young Jewish man was killed by a crowd of African Americans and there were other acts of violence. The weak response by New York City Mayor David Dinkins, the Democrat who was the first African American mayor in the city’s history, helped lead to his defeat to Republican Rudy Giuliani two years later.

Gaetz pressed Sharpton on the matter on Thursday.

“Have you ever referred to members of the Jewish faith as ‘white interlopers’ or ‘diamond merchants?’” Gaetz asked.

“No sir I referred to one in Harlem, an individual,” Sharpton insisted.

“Did you march next to a sign that said ‘the white man is the devil?’” Gaetz asked.

“I have no recollection of that,” Sharpton insisted.

“Have you ever referred to African Americans that disagreed with you as ‘cocktail-sip negros?’” Gaetz asked.

“I have,” Sharpton admitted.

“Have you ever referred to African Americans who disagreed with you as ‘yellow,’ and then the N-word?” Gaetz asked.

“I don’t know that I have…I’ve referred to people as names,” Sharpton replied.

“Have you ever referred to African Americans that disagreed with you as ‘negro militants?’” the congressman asked.

“This is taking our process down to a level that we should never allow it to descend to,” Johnson said. “I’m objecting to us wallowing in the mud with these comments.”

Still, U.S. Rep. Jerry Nadler, D-NY, the chairman of the committee, let Gaetz ask the questions though he thought the Panhandle Republican was being “obnoxious.”

Gaetz insisted he had the right to pursue questions about Sharpton’s past comments in light of him testifying before the committee on civil rights and police brutality.

The Florida congressman also offered the committee a reminder that Scarborough brought out a concurrent resolution “condemning the racist and anti-Semitic views of the Reverend Al Sharpton” which read as follows:

Whereas the Congress strongly rejects the racist and incendiary actions of the Reverend Al Sharpton;

Whereas the Reverend Al Sharpton has referred to members of the Jewish faith as “bloodsucking [J]ews”, and “Jew bastards’”;

Whereas the Reverend Al Sharpton has referred to members of the Jewish faith as “white interlopers” and “diamond merchants”;

Whereas the Reverend Al Sharpton was found guilty of defamation by a jury in a New York court arising from the false accusation that former Assistant District Attorney Steven Pagones, who is white, raped and assaulted a fifteen year-old black girl;

Whereas, to this day, the Reverend Al Sharpton has refused to accept responsibility and expresses no regret for defaming Mr. Pagones;

Whereas the Reverend Al Sharpton’s vicious verbal anti-Semitic attacks directed at members of the Jewish faith, and in particular, a Jewish landlord, arising from a simple landlord-tenant dispute with a black tenant, incited widespread violence, riots, and the murder of five innocent people;

Whereas the Reverend Al Sharpton’s fierce demagoguery incited violence, riots, and murder in the Crown Heights section of Brooklyn, New York, following the accidental death of a black pedestrian child hit by the motorcade of Orthodox Rabbi Menachem Schneerson;

Whereas the Reverend Al Sharpton led a protest in the Crown Heights neighborhood and marched next to a protester with a sign that read, “The White Man is the Devil”;

Whereas the Reverend Al Sharpton has insulted members of the Jewish faith by challenging Jews to violence and stating to Jews to “pin down” their yarmulkes; and

Whereas the Reverend Al Sharpton has practiced the politics of racial division and made inflammatory remarks against whites by characterizing the death of Amadou Diallo as a “racially motivated police ‘assassination’”:

Now, therefore, be it

Resolved by the House of Representatives (the Senate concurring),

(1) condemns the practices of the Reverend Al Sharpton, which seek to divide Americans on the basis of race, ethnicity, and religion;

(2) expresses its outrage over the violence that has resulted due to the Reverend Al Sharpton’s incendiary words and actions; and

(3) fervently urges elected officials and public servants, who have condoned and legitimized the Reverend Al Sharpton’s incendiary words and actions, to publicly denounce and condemn such racist and anti-Semitic views.

According to U.S. Sen. Kamala Harris, Sharpton “has spent his life fighting for what’s right and working to improve our nation, even in the face of hate” and it’s shameful, yet unsurprising that Trump would continue to attack those who have done so much for our country.”

U.S. Sen. Elizabeth Warren, D-Mass., insisted Sharpton “has dedicated his life to the fight for justice for all” and “no amount of racist tweets from the man in the White House will erase that—and we must not let them divide us.”  Warren added, “I stand with my friend Al Sharpton in calling out these ongoing attacks on people of color.”

“The fact that President Trump continues to use the power of the presidency to unleash racist attacks on the people he serves is despicable. This hate has no place in our country. It’s beneath the dignity of the office,” Biden added.