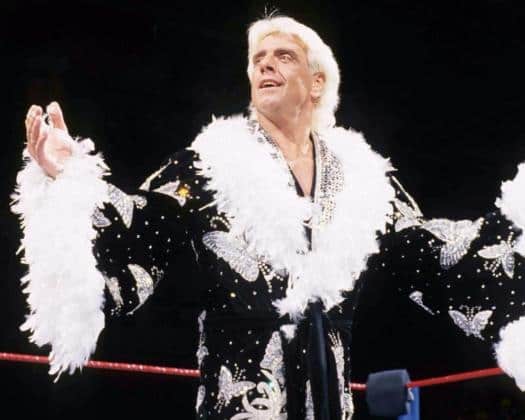 When it comes to Trump, it’s all about Flair.

If you want to understand Donald Trump, you don’t have to look much further than professional wrestling superstar Ric Flair. Flamboyant, even by professional wrestling standards, Ric Flair maintained an astonishing career and achieved a lengthy list of championships and successes. Adopting the nickname, “Nature Boy,” Ric Flair emerged in the 1970s as a fan favorite. With flowing blonde hair and swagger, he paraded in front of thousands wearing only an industrial speedo, boots and often a floor-length feather boa robe.

When a man dresses like that in public, he’s taken shame and embarrassment off the table. Brushing off insults about his crude or low-brow behavior like crumbs from a biscuit, he reveled in the drama of the wrestling world and adoring fans. Ric Flair understood that the real contest was not in the ring, but with the audience. He won by winning their love—or their hatred. To a professional wrestler, the only kryptonite is indifference.

Such is the case with Donald Trump. In fact, he even participated in the professional wrestling world, often entering the ring to join the antics.

No other politician could withstand a fraction of the relentless onslaught Trump daily faces. Yet, none of it sticks. Each assault makes him stronger. Hillary Clinton learned the hard way that insulting Trump’s supporters was equally futile. With one contemptuous comment, she launched an entire cottage industry of clothing, bumper stickers, coffee mugs, greeting cards, and other items bearing the infamous moniker, “Deplorable.”

When “elites” look down their noses at the crude or “common” behavior, Trump surges, his crowds grow, and his detractors are silenced. In Trump’s world, even the term “elite” has been turned on its head.

The key to understanding Trump is not to look at him, but rather see where Trump himself is looking.  Like Ric Flair, Trump’s point of view faces the audience. He has an uncanny bond with his audience that only he can break. If he loses a battle, he—and his audience—will blame it on outside sources. For Flair, the referees or out of the ring interference became his nemesis. For Trump, it’s the media and politicians who refuse to be winners with him.

The 2020 candidates have already set up themselves for failure because their playbook fails to include a counter to the Teflon Trump phenom. The key is not pandering to your audiences but genuinely loving them. Trump not only sees his audience but is willing to embrace them and affirm their heartaches, fears, dreams, and love of country.

In exchange, they don’t care what he says or what he wears or if his hair is red or blonde or how orange his skin may be on any given day—and they viscerally despise those who deride their champion.

As the media and those inside the Beltway wrangle over the Mueller report and Attorney General Barr’s redactions of it, while looking at Trump with loathing, they entirely miss where Trump is looking. Even the “Game of Thrones” parody tweet reveals that he is turning his back on them and facing the audience.

In countless arenas, Ric Flair paraded about to both the screams and adulation of the crowd. Neither his despisers nor his loyal fans could convince each other to switch sides. Regardless of whether he was loved or hated, no one ignored him.

Through the bare-knuckle brawls of business, beauty pageants, and a successful fake reality television show, Trump hammered out an extreme understanding of who, what, when, where, why, and how. Instead of boots and a floor-length robe, he struts out in an expensive suit, extra-long tie, a silhouette-worthy hairstyle, and uses an intentionally-reduced vocabulary.

Peter Rosenberger is the host of Hope for the Caregiver, a syndicated radio program heard weekly on 200 stations. For more than thirty years, he’s cared for his wife, Gracie, who lives with severe disabilities. To learn more, go to www.hopeforthecaregiver.com.