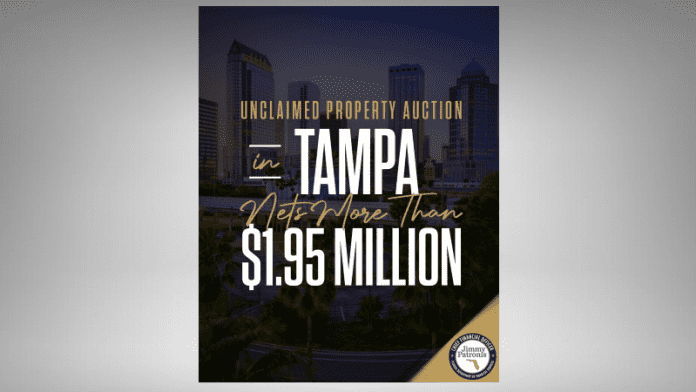 On Monday, state Chief Financial Officer (CFO) Jimmy Patronis announced that $1.95 million was generated by the state’s unclaimed property auction in Tampa this past weekend, including the sale of 460 lots consisting of more than 63,000 items.

Some of the items auctioned included an 8.17-carat yellow diamond ring, a William Shakespeare Fourth Folio dated 1685, and a 16 oz. gold bar. Until claimed, unclaimed funds are deposited into Florida’s school fund for the benefit of public education. There is no statute of limitations and consumers have the right to claim their unclaimed funds at any time, at no cost.

“The unclaimed property auction in Tampa this weekend was a huge success, generating more than $1.95 million in auction proceeds with more than 63,000 items sold. This is an awesome accomplishment and a testament to the hard work of our Unclaimed Property Division and everything they do on behalf of Floridians. Since 2017, we’ve held eight auctions throughout the state generating more than $12.1 million. Until claimed, these funds go to support public education in Florida through the State School Trust Fund. As your CFO, I’m proud to have returned a total of more than $1.7 billion in unclaimed property and my mission is to return every penny back to its rightful owner. An estimated one in five Floridians has unclaimed funds just waiting to be claimed and I’m encouraging all individuals and business owners to search today for unclaimed property at FLTreasureHunt.gov,” Patronis said.

Unclaimed Property is a financial asset that is unknown or lost, or has been left inactive, unclaimed or abandoned by its owner. The most common types of unclaimed property are dormant bank accounts, unclaimed insurance proceeds, stocks, dividends, uncashed checks, deposits, credit balances and refunds. Unclaimed property also includes contents from abandoned safe deposit boxes in financial institutions. Unclaimed property assets are held by business or government entities (holders) for a set period of time, usually five years. If the holder is unable to locate, re-establish contact with the owner and return the asset, it is reported and remitted to the Florida Department of Financial Services, Division of Unclaimed Property. Unclaimed funds are deposited into the State School Trust Fund and used to support public schools. However, the original amount reported can always be claimed by the owner, or his/her heirs, at no cost. 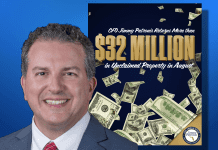 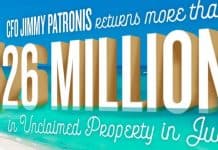 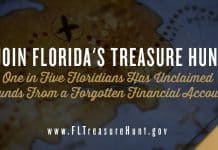 Jimmy Patronis: More Than $20 Million in Unclaimed Property Returned to Floridians in June