Federal money from the $1.9 trillion stimulus package that Congress passed on a party-lines vote in  March will be used to pay for undocumented college students’ expenses including housing, food, childcare, computers, online access and other essential expenses.

The U.S. Department of Education is planning to send $36 billion in federal funds to universities and community colleges for students who receive Pell Grants, including undocumented students. This reverses a Trump administration policy that barred colleges from distributing pandemic relief to undocumented students, including those living in the country under the Deferred Action for Childhood Arrivals program and who are better known as “Dreamers.”

The Trump Education Department also banned funds to those who had defaulted on student loans or a drug conviction.

U.S. Education Sec. Miguel Cardona said the new rule will allow colleges to distribute tens of billions in federal funds to students, regardless of their immigration status.

“The pandemic didn’t discriminate on students,” Cardona said. “We know that the final rule will include all students, and we want to make sure that all students have an opportunity to have access to funds to help get them back on track.”

According to the Presidents’ Alliance on Higher Education and Immigration, a group of higher ed leaders, there are around 450,000 of undocumented students enrolled in the nation’s higher-education system.

But critics of this policy wonder why wasn’t showcased when the stimulus package cleared Congress in March.

OpenTheBooks CEO Adam Andrzejewski, a senior contributor to Forbes, compared the situation to when U.S. House Speaker Nancy Pelosi, D-Calif., said “we have to pass the bill so that you can find out what is in it” about the passing of the Affordable Care Act in 2010.

“Every week we are finding new amounts of waste into the billions spent by the federal Department of Education that wasn’t debated, it shows why the Democrats rammed this through,” Andrzejewski said, insisting that when voters see the waste that is being spent, the party in power will do well in the next election.

Andrzejewski ran for the Republican gubernatorial nomination in Illinois back in 2010. He placed fifth in a close and crowded primary. 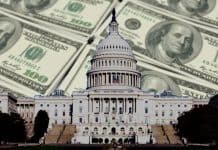