For years, women have been between 10 to 20 percent of gun buyers in America–but that has drastically changed over the past two years.

A new report from the National Shooting Sports Foundation (NSSF) finds that almost half of new gun owners since 2019 have been women.

Some gun stores in Florida report that, not only are more women buying guns, most of the people taking the concealed weapons class are female.

“We’re seeing a lot of women, not only purchasing firearms,” said Z. Farhat from Green Acres Sporting Goods in Jacksonville. “Our concealed weapon class is made up of about 60 percent women.”

Last year, there was a record-high 21 million federal background checks on gun purchases and the new report says sales are not slowing down. The NSSF noted the trend that began in 2019 continues and could last through next year. The survey also found that a majority of purchases–58 percent– came from African Americans.

Gun stores owners say the main reasons for the continued rise in sales are the pandemic and continued violence.

Marketing experts say the days of selling certain types of guns is over. For example, gun companies pushed pink weapons and holsters and featured brighter colors to attract more women buyers. However, industry experts now say women are looking for guns that fit their hands and can be used in case of an emergency.

Blacks and Women Helping Increase Gun Sales Across Florida and the U.S. 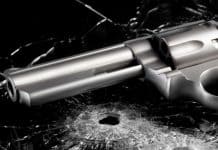